KNIGHTS CLIMB TO FOURTH WITH BONUS POINT WIN OVER COBRAS 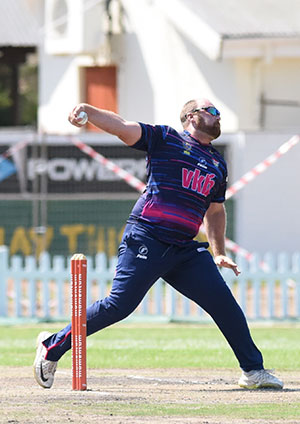 An inspired bowling display followed by Patrick Kruger’s dashing half-century ensured that the VKB Knights were still very much alive in the race for the Momentum One-Day Cup semi-finals, after they blew away the World Sports Betting Cape Cobras with a bonus point victory in Oudtshoorn on Saturday.

The Central Franchise won by seven wickets and with more than 22 overs to spare at the Recreation Ground, where 172 for nine played 173 for three after the underwhelming hosts won the toss and batted first.

But they were massively disappointing as the visitors came out all guns blazing.

Shaun von Berg’s three wickets for just 23 in 10 overs were the best of the figures, while Andries Gous (2/9), Ottniel Baartman (2/24) and Jacques Snyman (1/26) were also excellent – the Cobras making a complete mess of their innings.

Only Aviwe Mgijima managed to walk away with any credit after he hit an unbeaten 44.

In reply, the Knights wasted little time getting to their target, with Kruger clubbing three sixes and six fours in a quick-fire 60 off 47 balls to power his side to a vital win – one that lifted them to fourth on the table.

That represented good progress for a side that had failed to win any of their first four matches.

Their opponents, meanwhile, remained rooted to the foot of the table, with their play-off hopes hanging by a thread.

The Cobras, who have been hit hard by Standard Bank Proteas call-ups, handed a debut to Tayo Walbrugh, and the youngster, alongside Pieter Malan (29), did at least manage a strong start to the game through an opening stand of 49.

But spinner Von Berg removed both men, and followed that up accounting for the competition’s top-scorer and opposing captain Zubayr Hamza (5).

And it continued to go south from there, with a total of six wickets slipping for less than 50 runs as the Cobras suddenly found themselves on 94 for six.

Mgijima did his best to stand his ground, but with not much support in terms of batsmen, the home side could only set 173.

Gous, their matchwinner from the previous game, fell early this time, but Snyman’s attacking 45 helped the runs to flow in a 59-run, second-wicket stand alongside Kruger, who then put on 78 with Keegan Petersen (42 not out) for the next wicket.

Pite van Biljon (20) then applied the finishing touches as the Knights sealed an emphatic win with nearly half their overs to spare.