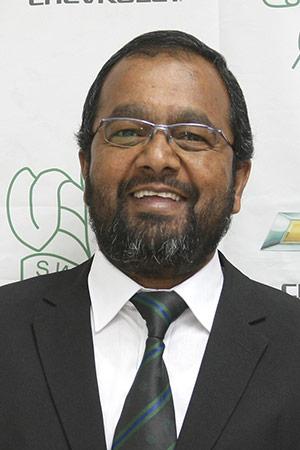 He moved from Gauteng to Mossel Bay in the mid-1990’s where he was employed at PetroSA and became involved in umping when he was discovered by the late Wilf Diedericks – a former international umpire. His breakthrough as an umpire came in 2010 when he officiated in the 2010 ICC Women’s Cricket Challenge – a limited overs tournament that was hosted in October 2010. Between 2010 and 2017 he officiated in 30 First Class, 26 List A - and 16 T20 matches.

He was actively involved as a member of the Executive Committee of the SWD Cricket Umpires Association where he served in many positions – including that as chairman. At the time of his passing, he was the Training Coordinator of the Association.

Many ex-colleagues and players paid tribute to him on various social media platforms – including Jean Neethling, a former Chairman of the SWD Cricket Umpires Association. This is such shocking and sad news. Faizel was a legend in cricket circles. A true gentleman. I went to countless tournaments with him. We spent countless meetings together. Faizel was always in control of any situation. He was our first First Class umpire. He did great things for the SWD Cricket Umpires Association as training coordinator and chairperson. He was also a true and loyal friend. We will miss him greatly. RIP my old friend, Neethling posted.

In his tribute the President of SWD Cricket, Mr Rudy Claassen, said – On behalf of the cricket fraternity of the SWD I would like to honour his contribution towards SWD Cricket, he said. Our heartfelt condolences to the Samsoodien family. He will surely be missed.