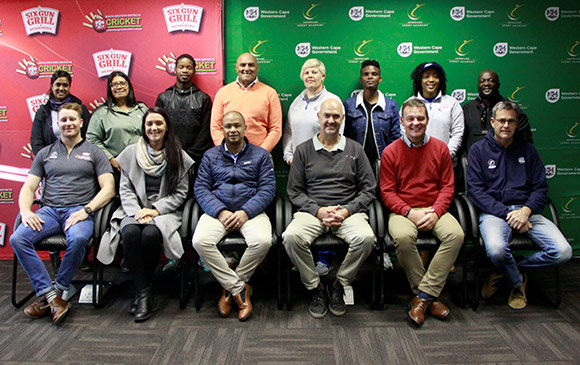 Six Gun Grill South Western Districts Cricket (SWDC) has announced a favorable partnership with the Eden District Spot Academy (EDSA)! This partnership was announced during a launching function that was held at the EDSA last week. The Academy is situated at the De Jager Sports Centre in Oudtshoorn, a stone-throw away from the Recreation Ground – the home of SWD Cricket.

This partnership, which is documented in a formal agreement between the two parties allow all the Six Gun Grill representative teams access to a gymnasium facility, focused to cater for the training requirements of high-performance athletes. This agreement also makes for provision for access and office space utilization for the training personnel of SWDC.

During the launch the EDSA administrator, Ms Stephnie McKay, welcomed SWD Cricket to the premises and facilities. “We are extremely excited about this partnership and is very honored to host a well driven and ambitious sport code like SWD Cricket at the EDSA”, said McKay. During his address, Mr Rudy Claassen, the president of SWDC describe the conclusion of this partnership as a long-awaited ambition of SWDC. “A high-performance training facility of this nature is an important part of our ambition to reach further heights in all our cricket structures and this agreement will be extremely beneficial to the SWD professional, - women, - academy and - youth teams”, he said.