Botha, whose first class playing career stretched from 1987 to 2002 has played in 118 first class- and 110 List A matches for the former Transvaal, Border and South Africa A. The versatile Botha scored 4,982 first class runs with 5 centuries and 25 half centuries. He also bagged 217 wickets at first class level with a best bowling analysis of 6/33

After his playing career, the 55-year old Botha, moved into the coaching profession. He was first appointed Academy and later High-Performance coach at Border. Between 2006 and 2019 he was involved in various coaching positions at Eastern Province and the Warriors and most notably the Head Coach of the Warriors - the Eastern Cape professional team - between 2011 and 2014. During his coaching career Botha - who is a Cricket South Africa Level 4 qualified coach - was extensively involved at National level as the bowling coach and bowling consultant for the SA Academy and SA ‘A’ team where he played a pivotal role in the emerge of national players like Glenton Stuurman, Dwaine Pretorius, Sisanda Magala and Anrich Nortjé. Since 2021 he was the Director of Cricket at Paul Roos Gymnasium in Stellenbosch and served as the bowling consultant of the Highveld Lions. 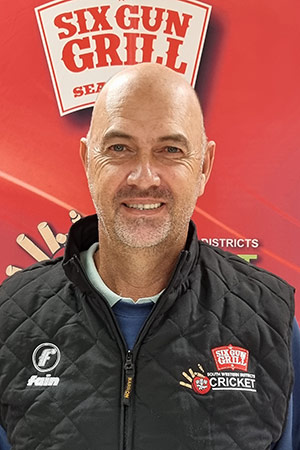 We continuously strive to attract a highly qualified, skilled and an experience human resource component to achieve our vision in striving towards excellence at all levels, said SWD Cricket Chief Executive, Albertus Kennedy. Promotion to Division 1 at the end of the upcoming season is still within our reach and we are confident that Piet with his support staff and the contracted squad will deliver the desired results.

I am very honoured to be named the head coach of the Six Gun Grill SWD Cricket team, Botha said. It was always one of my distant dreams, and finally I can do it and I’m very excited about the opportunity. One of my first jobs it to create a culture and team environment to help the team to operate in a professional manner, secondly is to help the players to grow individually in their own games, ultimately to reach their own goals. And lastly to help the SWD to be elevated into the top tier of South African cricket, he concluded.

In his response SWD Cricket president, Rudy Claassen, said that the Board has put a vote of confidence in his abilities as a coach with the aim to achieve the desired results. We want to welcome him in the SWD Cricket family and trust that he will take SWD Cricket to new heights, he said.

The rest of the coaching staff is: