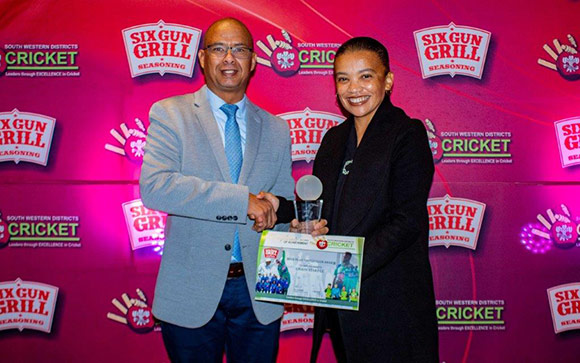 The Union Stars Cricket Club from Oudtshoorn was honoured at the SWD Cricket Annual Awards function that was held last week with the Cricket South Africa Blue Flag status award. CSA already announced in November 2019 that the club met the requirements to receive Blue Flag status but due to the Covid-19 pandemic the formal hand-over could only take place at this gala event that was held on 7 May.

Only twenty clubs in South Africa received this award. “Blue Flag Status for Clubs” is a Cricket South Africa recognition given to clubs who have driven the objectives and aims of the Presidential Plan (provides a minimum to operating an effective cricket pipeline structure). The criteria used to ascertain the status of such a club is based on administration capabilities, adequate facilities, minimum number of teams and suitably qualified coaches. Affiliated registered clubs need to complete a Club Quality Index (CQI) form to ascertain their status. The CQI is an administrative self-evaluation document that serves to guide or be used as a reference in ascertaining the status of a registered club in driving the CSA Presidential Plan Club cricket objectives. A club wishing to ascertain Blue Flag Status must score 90 percent on the CQI.

Union Stars was established in 1892 and has a proud and rich tradition and history in the SWD. The club has over the years been the most successful club in winning competitions played under the auspices of SWD Cricket and produced famous SWD players like Gurshwin Rabie, Marcello Piedt, Ottniel Baartman, Pieter Stuurman and Waldo Lategan. The current president of the Board, Rudy Claassen, as well at Simon Swigelaar – an honorary life members of the club.

In his response, Mr Claassen, congratulated the club with their achievement and thanked all the role players for their hard work and contribution. “We are indeed very proud on the club’s performances to achieve this recognition”, he said.

The qualifying clubs will be able to wear the prestige CSA blue flag logo on the sleeve of their playing shirts and the club was be awarded with a CSA plaque of recognition – which was awarded to the Chairperson of the Club at the Awards function.