SWD STUMBLES OVER THE LAST HURDLE 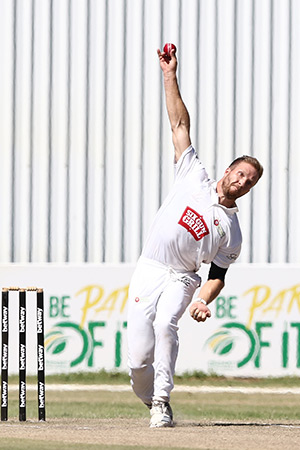 Northern Cape Heat were crowned champions of the Division 2 CSA 4-Day Domestic Series 2021/22 after their match ended in a draw against the Mpumalanga Rhinos on Sunday. The draw saw the Heat winning the title despite rain interruptions on the last day after contenders, Six Gun Grill South Western Districts suffered a 9 wicket defeat against the Eastern Cape Iinyathi at the Recreation Ground in Oudtshoorn.

SWD went onto their final match with a two-point lead over the Heat but the Oudtshoorn-based side was off to a not-so-good start. After electing to bat first on Day One, the Iinyathi bowling attack dominated their opponents, taking wickets at regular intervals throughout the innings. A century from Jean du Plessis (144 runs) provided a huge contribution and with a backing 56 runs from Sean Whitehead, SWD ended their first innings on 238 all out. Iinyathi’s Sinovuyo Ntuntwana and Joshua Dodd both claimed three wickets each in the first innings. SWD bowlers also opened their attack early to dismiss the Iinyathi top order and with their score at 55/5 SWD was in a strong position but the lower order came to the rescue as Thomas Kaber’s unbeaten 138*, supported by Marco Marais 56, and Mncedisi Malika 49 helped the East London side end their first innings on 314. Sintu Majeza 3/56 and Sean Whitehead 3/65 were the main wicket takers for the home team.

In the second innings, SWD were bowled out for only 188 runs. Opener, Blayde Capell’s half century, (76 runs off 134) was not enough as his teammates struggled with the bat. Kaber continued to dominate from his batting to claim seven wickets in the second innings, (7/67 in 16 overs). The Iinyathi only needed a total of 113 runs to win the game. Jerome Bossr (57*) and Nonelela Yikha (46*) reached the target in twenty-nine overs with the loss of only one wicket, Jason Niemand (4).