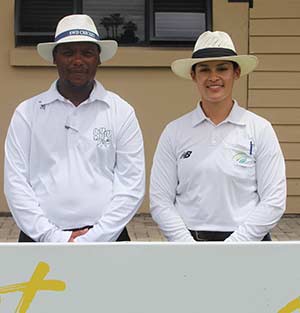 Kerrin Klaaste, one of the emerging umpires on the SWD Cricket Umpires panel made history on Sunday when she became the first female umpire to officiate in a league final of SWD Cricket. She, together with Nathan Rhodes, officiated the Six Gun Grill SWD T20 final that was played at the Recreation Ground in Oudtshoorn.

Klaaste will also soon officiate in the Khaya Majola U/19 national cricket week that will take place in Potchefstroom during December and the Cricket SA National Cubs week that will be hosted in Stellenbosch during January 2022.

A former SWD captain, Waldo Lategan, who is now a member of the Western Province Cricket Umpires Association will also officiate in those two national tournaments.