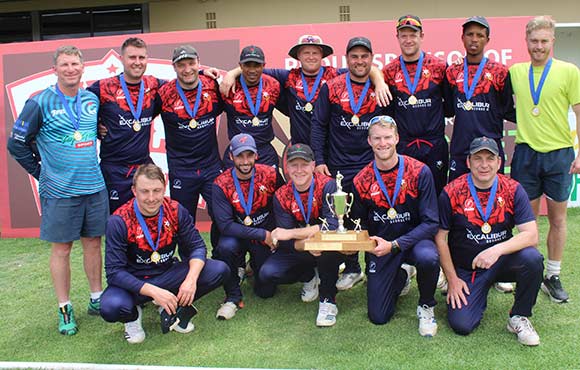 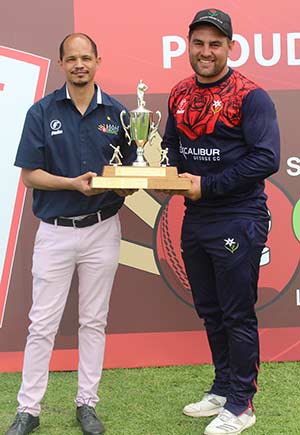 Mr Shael Laminie, the vice-president of SWD Cricket, hands over the trophy as winners of the Six Gun Grill T20 knock-out competition to Franco Geldenhuys – the captain of George CC.

George Cricket Club was crowned the Six Gun Grill SWD Twenty20 champions for the 2021/22 season when they defeated Mossel Bay by 27 runs in the final that was played at the Recreation Ground in Oudtshoorn on Sunday.

George (134/8) advanced to the final with a 47 runs victory when they restricted Pacaltsdorp United to 87/7. The former Protea batsman, Richard Levi, scored a match winning 55 for the winning team while Simon Venter (4/16 in 4 overs) impressed with the ball. SWD opening batsman, Yaseen Valli (58) was the batting hero for Mossel Bay (127/7) who qualified for the final when they outplayed Union Stars (111/5) for a 17 runs victory.

In a low scoring final George batted first and posted a modest 109/8 whereafter they dismissed Mossel Bay in the last over for 83 to successfully defend their T20 title which they won in 2019/20. No competition was played last season.

George will now carry the hopes of SWD when they will compete with the winners of Boland and Western Province on 11 and 12 December to determine who will represent the Western Cape in the CSA Momentum Community Cup T20 competition. 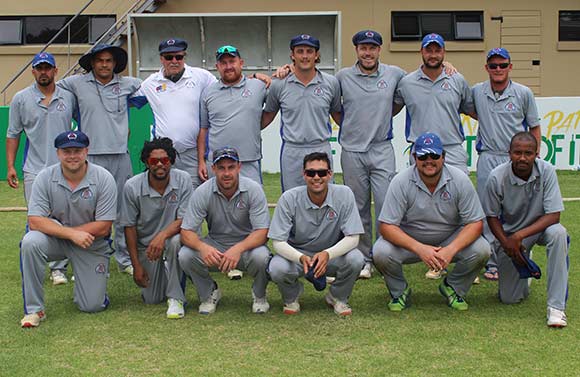 The summarized score cards are: