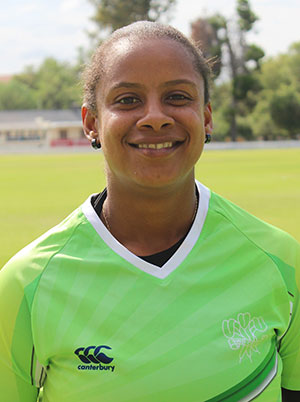 The captain of the SWD Women’s cricket team, Haroline Rhodes, from the Union Stars Club in Oudtshoorn was honoured as the South African Forces women’s cricketer of the year at the Cricket South Africa Annual Awards ceremony.

On Friday evening, Cricket South Africa (CSA) hosted its annual CSA Amateur Awards in association with KFC. The event was held in honour of the stars of tomorrow and those that work tirelessly behind the scenes to help develop the game. In what was a first for CSA and KFC, the gala event, traditionally held as a Breakfast Awards ceremony on the day of the main awards, instead took place 24 hours earlier and was beamed across digital media platforms due to the restrictions imposed by the COVID-19 pandemic.

Rhodes, a staff member at the Infantry School, excelled for the SA National Defence Force during the SA Forces tournament that was held in Cape Town in February in a triangular tournament that also involves the SA Police Services and the SA Correctional Services. She was included in the SA Forces team that was selected upon completion of the tournament and played against the Western Province Women’s team in Cape Town.

“Congratulations to Haroline,” commented SWD Cricket President, Mr Rudy Claassen. “She is a consistent performer over the years. This reward is well deserving and makes SWD Cricket proud”.