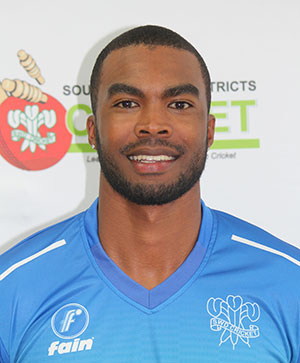 South Western Districts’s most capped player in all formats of the game is no longer part of the Oudtshoorn based team as he entered a contract with Western Province and will next season further his career at Newlands in Cape Town. He represented SWD in more than 200 matches across all formats.

The left hander wicket keeper/batsman, who made his first class debut for SWD in January 2010 at Oudtshoorn against KwaZulu Natal, represented SWD in 102 first class matches (out of a total of 144 that SWD played since the 2006/07 season) and holds the record for the most first class career runs – 4,494 at an average of 29.37 with four centuries and 27 half-centuries. His highest score of 167 was achieved the past season against the Gauteng Strikers in Oudtshoorn. His 317 dismissals as a wicket keeper is also a SWD record and three times he recorded six dismissals in an innings.

Louw who was elevated in the SWD senior team in 2010 after representing the SA Schools XI in 2008 – as a grade 11 – also represented the Warriors in 4 four-day matches (in 2011/12) and the North West Warriors in three matches during the winter of 2019 in the Cricket Ireland Inter-provincial Championships. The 28-year old, who hails from Plettenberg Bay, matriculated at Outeniqua High in George where he also represented South Africa as an U/17 hockey player.

He regarded Albie Morkel – when playing franchise cricket for the Warriors against the Titans – as the best bowler he ever faced. When asked which coaches have influenced his career the most he applauded Johan Weyers (his SWD u/18 coach) who is currently the Manager Senior Cricket at CSA and Garry Hampson – who coached SWD for five seasons as his cricketing mentors. “It is hard to single out a specific highlight but my maiden first class hundred against Easterns in Benoni in the 2011/12 season will always brings good memories”, he said.

“At 28 years of I still have the appetite and aspirations to play franchise cricket and I am looking forward to the new challenge at Western Province” he said. Louw, who will be an understudy to Kyle Verrynne for the wicket-keeping position at the Cobras will be aiming to cement his place in the Newlands based team with Verrynne who will be a strong contender to be in the Proteas squad.

“Brendon’s records for SWD speaks for itself and his contribution towards the team and and badge makes him one of the most outstanding players to represent SWD”, said Albertus Kennedy, the Chief Executive Officer of SWD Cricket.

In his response to Louw’s departure, the President of SWD Cricket, Mr Rudy Claassen thanked Louw for his commitment and dedication towards SWD Cricket. “I would also like to wish him all the best for his future career”, Claassen said.